A member of the popular Clifton Family of Risley Acrobats, Gymnasts, Sketch Artistes & Comedians who toured the British Isles & Ireland during the late 19th Century.

Married Betsy YELLOWITZ  at Birmingham Register Office on 27th April 1893 as Joseph Clifton, and for the second time according to the rites & ceremonies of the Jews at the Synagogue, Birmingham on May 28th 1893 as Joseph Lazarus, the family having adopted the surname Lazarus in abt.1891.

By 1911, Joe was separated from his wife Betsy, being named in an unheard of case, at that time in legal history, before Mr. Justice Coleridge in the King's Bench Division on 6th April 1914. Mr. J. Clifton appeared, of Boganny Ltd, 102, Tulse Hill, London, SW, his wife Mrs. Betsy Clifton and son Samuel Clifton were seeking damages and suing for Libel in which Boganny was ordered to pay damages. Prior this date Joe had entered into a relationship with Mrs. Esther Myerson of Birmingham, who over time became known as Etty Boganny and his common-law wife, a partnership that edured for the rest of their lives.

Joe Clifton made his first appearance aged three as a member of his fathers 'Raslus Troupe' and entered the circus ring. Later performed with his brother Josh Clifton, sister Mary Clifton aka 'Mdlle. Pauline' and step brother Abraham Alvarez aka 'Alf Daniels' appearing as the 'Elka Troupe' from 1885, a lighting acrobatic troupe who performed flying corde, wire-walking, hat-throwing and drawing-room entertainments, the brothers performed separately as the Brothers Elka, all until 1891 when they became the 'Royal Clifton Brothers', 'Clifton Brothers', 'The Clifton Trio', becoming a smash-hit with the public as they toured Britain, Ireland and Europe during the 1890's with their eccentric comedy knockabout routines until 1900.

In time sibling rivalry ensued, the brothers each claiming to be the 'Originators of Comedy Risley' in The Era's Classified Ads during the late 1890's for all to see, briefly they produced separate acts until in 1900 Joe went his separate way, took on the name 'Boganny' and formed The Boganny Troupe announced in The Era on 7th Jul 1900. Joe Boganny and The Boganny Troupe first appeared at The Empire Theatre, Bristol on 6th July 1901, billed as 'The Originators of Comedy Risley' with 'The Lunatic Bakers', in association with Hamilton & Poole's Myriorama Tour which he played for over two decades and which made his name famous.

Later he produced, with enormous success, 'The Opium Fiends', 'Five Minutes in China Town', 'Fun in a Bakehouse', 'The Crazy College Boys' and others. All these Acts along with other troupes of tumblers and Risley performers of a similar nature he toured, building up a considerable reputation which he enjoyed in this particular sphere all his life. Boganny had played nearly every leading Music Hall & Theatre in the British Isles, including The Palladium in London where he appeared often, and toured Europe, the USA regularly, Australia, and other countries.

Commanded by The King, Edward V11 to appear at Buckingham Palace on 6th July 1907, being congratulated by His Most Gracious Majesty on his triumphant success., appeared at the first Royal Command Performance before King George V & Queen Mary at The Palace Theatre, Shaftesbury Ave, London on 1st July 1912., and again on 29th July 1913 Joe Boganny and his Lunatic Bakers were commanded to perform at Buckingham Palace for King George V, Queen Mary and the Royal Party.

Joe Boganny was taken ill on 29 Jul 1943 whilst residing at The Redcliffe Hotel in Fulham Road, Kensington, London and was transferred to St. Mary Abbot's Hospital, Kensington where he died a few hours later. He was buried on 01 Aug 1943 at East Ham Jewish Cemetery, London where he lies in a now unmarked grave. 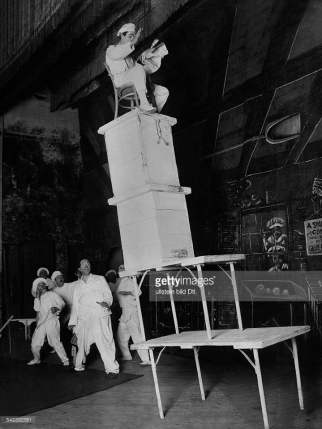 A company of young men, boys, midgets, and often a dog, who presented a Music Hall acrobatic slapstick comedy routine most popular during the early 1900's as 'The Lunatic Bakers', 'Opeum Fiends', 'Fun in a Bakehouse' and later 'The Crazy College Boys' and others. The original Boganny Troupe being formed in 1900 by Joseph Clifton aka Joe Boganny, son of 'Raslus' the renowned Equestrian Clown & Gymnast aka Frank Clifton.

WANTED - any information regarding 'Boganny's Boy's', former members of the Boganny Troupes ( at one time there were 2 Boganny Troupes in operation based in London & New York )