Hi, welcome to my site, joeboganny.co.uk which documents the careers, lives and ancestry of my great-grandfather, his father, their family and cousins, many of whom toured throughout the British Isles, Ireland, Europe, the USA, and other parts of the world from the 1850's, performing in Circus, Music-Hall, Theatre, Vaudeville and Variety.

Joe Boganny, Music-Hall Artiste, Acrobat & Comedian (1874-1943) was a son of the Great Raslus, and made fame during the early 20thC with his Company of Comedy Risley Acrobats, The Boganny Troupe, performing popular and highly successful acts including 'The Lunatic Bakers'. 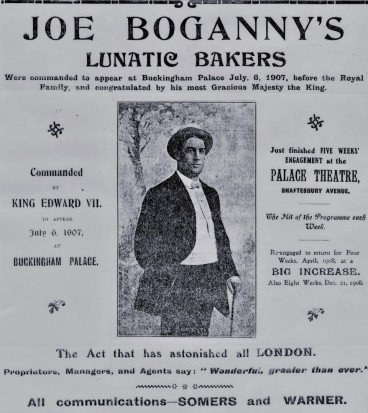 Frank Riley (1842-1904) professionally known as FRANK CLIFTON the 'American Gymnast' and pupil of Hiram W. Franklin, also appeared in the UK & Ireland as RASLUS, the celebrated Slack-Rope Performer & Equestrian Clown who successfully managed careers on both sides of the Atlantic Ocean for thirty years.

A to Z of Joe Boganny's wider family of entertainers, personalities and noteworthy characters:-

All material documented here at joeboganny.co.uk has been researched, accumulated and presented by