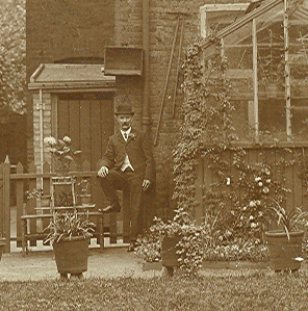 In March 1861 Joe Daniels was performing at Frampton's Music Hall, Lord Nelson, Euston Road, Euston Square, London in partnership with Sam Redden. The Era announced, 'In reply to numerous applications Sam Redden and Joe Daniels beg to thank those Managers who have honoured them by offers of engagements, but in consequence of their increasing popularity at the Regent Music Hall, Westminster, where they have appeared fifty nights before upwards of 70,000 persons, they are compelled to decline all engagements till September 19th, 1864. Address George Webb and Company, International Musical and Equestrian Star Agency, 3, Snow Hill, EC.' Performing as blackface vocalists, on violin, banjo, bones, tambourine, clog, boot and pump dancers successfully toured the halls in their Ethiopian Burlesques. Their partnership endured until late 1865 by which time and with great success they'd toured the UK and Ireland.

A brief interlude performing with the Howard Harcourt, an ebony orator, vocalist and comedian, then by 1869 began appearing around the halls in an eccentric negro dance act with his eldest son Israel aka 'Nimble Nip.'

In 1873 advertised in The Era, 'Joe Daniels, the great American comedian, vocalist, instrumentalist and dancer and the Royal Nimble Nip (from Drury Lane) who had the honour of appearing before H.R.H. the Prince of Wales and H.R.H. the Duke of Edinburgh. Now appearing at the Oriental Theatre, Poplar & Gattie's Palace of Varieties, Whit-Monday. Nb. Mr. J. Daniels gives lessons on the banjo and instructs gentlemen for the stage in all branches of the business. At 92, St. Aldates, Oxford & 48, Bridge Street, Cambridge. Address 4, White Horse Lane, Mile End, London.

Joe Daniels was commanded by Queen Victoria to appear at Windsor Castle, and patronised by the Prince of Wales, later King Edward Vll, who presented Joe with a silver medallion inscribed with the Fleur de Lys which he had fixed to the peghead of the banjo Joe played in his public performances.

On 18 May 1885 it was announced in the Windsor & Eton Express - For the convenience of the members of Eton College and the Officers and Gentry of Windsor and Eton, the celebrated banjoist, Professor Joe Daniels will open a Banjo Studio at 112, High Street, Eton, and will receive pupils there on Tuesdays and Saturdays from 11am till 7pm. Mr. Daniels will be happy to select instruments, terms and particulars can be had from Minstrel House, Grove Road, Bow, London.

In 1887 he patented the world renowned Defiance Banjo having established a studio at 28, Bishopsgate Street, Aldgate, London and where the instruments were assembled, no-doubt overseen by himself or one or other of his ten sons.

In 1888 'Daniels' Banjo Magazine' was published, price 1/6 and described in the Hackney and Kingsland Gazette of 11 Jan that year, 'New Literature, Daniels' Banjo Magazine and Banjo Arrangements. Joe Daniels, 23, Bishopsgate Street Within, EC. These publications give capital selections of both comic and sentimental songs with banjo accompaniments arranged by Mr. Joe Daniels the premiere banjoist. Some of the effusions are brimful of humour, especially those of the darkey class, whilst those of the sentimental kind are by no means devoid of pathos. The arrangements constitute a book of some 30 breakdowns, hornpipes, duets, dances and jigs, which will be very acceptable to those who are specialist in banjo music.'

On 25 Jul 1889 he announced the following in the Portsmouth Evening News, 'Banjo. Joe Daniels, the celebrated banjoist entertainer of 23, Bishopsgate Street Within London, Inventor and Manufacturer of the world renowned Patent Defiance Banjo, having decided to stay at Southsea, will be most happy to Give Instructions on the Banjo. Terms on application.

1, Higher Bank, Clarendon Road, Southsea. May be Engaged for Concerts, Parties, &c. Ladies and Gentlemen taught at their own residence. Instruments selected.

From 1891 to 1893 Joe was the licensed victualler of and resident at the Royal Oak, 110, Union Road, Rotherhithe, London, whilst continuing family occupancy of the property in Mile End.

In 1906 in 'The Gentlewomen' an example of his work was advertised for sale, 'Very fine piccolo banjo with real ebony and ivory fittings, inlaid with german silver, by the celebrated maker Joe Daniels, finest maker in the world, cost £8 8s, in case, complete.' Also that year in The Referee, 'Banjo and Stage dancing taught, thoroughly. Pupils tutoured for the stage. Mr. Joe Daniels excels as a teacher of the above. He is a manufacturer of banjos, so you can rely upon getting the right thing, 112, Leadenhall Street, EC, phone 12099 Central, Established 1870, Terms moderate.'

Died of heart failure in a cab enroute to 22, Buckingham Road, Brighton, Sussex in 1915. His epitaph reads - In loving memory of Joseph Toledano (Joe Daniels) who passed suddenly away on March 12th 1915 aged 73 years. Sincerely mourned by his beloved children, grand children and relatives, 'Oh for the touch of a vanished hand and the sound of a voice that is stilled' May his dear soul rest in peace.