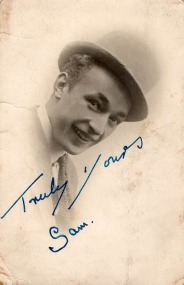 Brother of Hannah Lazarus b. 8 Oct 1897 Birmingham and of Douglas Boganny Phipps b. 25 Jul 1905 Chiswick, London by Harriet Phipps of Wood Green, London.

Began his performing career touring the UK with his fathers Boganny Troupe of comedy risley acrobats in their sensational act the 'Lunatic Bakers', and known as Sam Boganny, also performed with his Uncle Josh Clifton's comedy tumbling routines in the 'Six Ceylons' & 'Five X-Rays'.

At the 1921 UK Census, described as a Music Hall Artiste and Comedian, Samuel C Lazaus was employed by Moss Empire Ltd and living with his wife and child, mother, sister and three uncles in Edgbaston.

Made his first appearance at the Paragon Music-Hall, Mile End, London. Went solo in 1923 as a knockabout comedian choosing a new name, Sam Linfield, a family name on his mothers side. Toured the UK, Europe, USA and Australia in Variety with his Linfield Troupe of fast acrobatic nonscence acts, 'No Man's Land', 'Odds & Ends', 'Boot Villa', 'HMS Lively' and 'Crazy Scouts & Sailors' and others.

The photo's of Sam with his first wife Jessie, two unidentified dimimutive troupe members, and a driver dated 1929 were taken whilst visiting Charlie Chaplin's home in Hollywood, USA.

A few months later an article in the Variety World section of The Stage Newspaper of 19 Feb 1930 stated "For the past three months Sam Linfield and Company have been touring with the Fanchon and Marco roadshow in the States. Present engagements extended until next may, and Sam does not expect to be home (England) until the end of the year".

During the 1950's Sam went on the road with his popular slap-stick acts 'The Space Ship Show' & Colonel Sam Linfield's Crazy Space Cadets and others, touring the UK, USA and further afield.

Died on 16 Sep 1961 at St. Mary's Hospital, Paddington, London and was cremated on 19th at Golders Green Crematorium, Barnet, London, England, a notice was printed in The Stage and Television Today, on Sep 21 in memoriam.